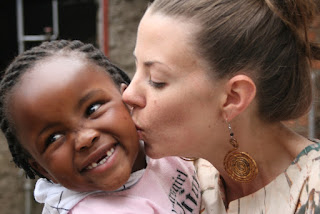 This month we celebrated someone special at Imbabazi – Ashley – our Peace Corps Volunteer. November marks the end of her service with Imbabazi.

Her journey with Peace Corps has been interesting and full of surprises as she began her service in the Northern African country of Niger. After 6 months, she was evacuated due to security concerns. She spent one month in Morocco waiting for her next assignment. She was reassigned, along with three other volunteers from Niger, to Rwanda. After one month of Kinyarwanda language training she arrived at Imbabazi in March 2011.

The Peace Corps Program reopened in Rwanda in 2009. Since that time Imbabazi was interested in receiving a volunteer. So when Ashley was assigned to us we were very excited!

In her first months at Imbabazi it was clear she was a good fit for our organization. Her laid back, objective and humorous personality, her ability to adapt quickly to situations and her willingness to be part of a team helped her become an integral part of Imbabazi and our community. She spent her first few months getting to know Imbabazi’s children and our community allowing her to learn Kinyarwanda quite well.

During her time at Imbabazi, Ashley accomplished and managed many activities including: 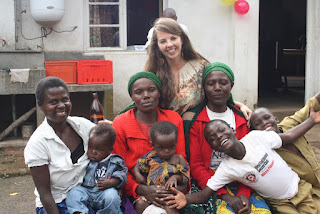 By the end of her service, Ashley was loved by our staff and community having earned their respect and trust. Her going away party was held at Imbabazi. Some people walked more than an hour to give Ashley their farewells wishes. Everyone enjoyed Fanta, cake and music. Many Imbabazi workers and community members gave speeches of appreciation. Finally, the traditional drum appeared and the dancing started. It was great to see everyone having such a wonderful time. 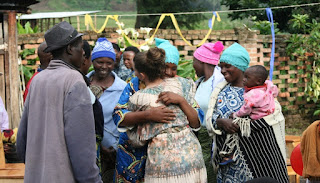 We are sad to see Ashley leave but are grateful for everything she has done for Imbabazi. We all gave her hugs and said “Until next time our friend!”