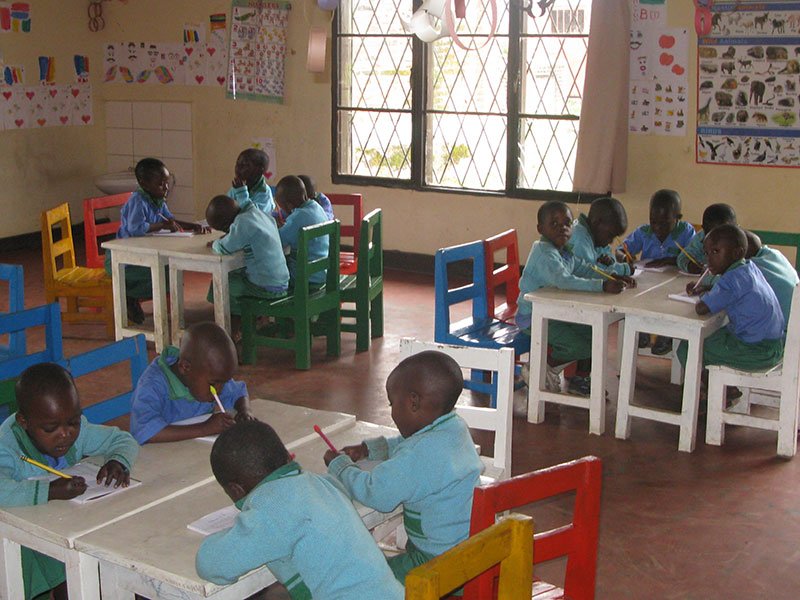 A few years ago, after the Imbabazi was no longer a residential orphanage, the Imbabazi Board decided that it wanted to do something in support of the local community in Mudende which would reflect Roz’s great love of children, and the idea of establishing a pre-school came about. This would give the orphanage buildings another purpose at the same time as offering the children of the area around Imbabazi an opportunity to learn and play together that was not otherwise available to them in this rural corner of Rwanda.

After the renovation of the former dormitories into classrooms, the buying of toddler-sized furniture, the collection of toys and materials and the hiring of teachers, Imbabazi Pre-school finally opened its doors in September 2014. Now in its second year, it offers three classes, each of just over 20 children aged between 3-6 years, with an innovative learning plan encompassing both English and Kinyarwanda languages and an emphasis on play and outside activities. A key element of the pre-school is that all children are given a breakfast of hot milk and a biscuit on arrival and finish their school day with a full lunch made from local produce, some of it grown at Imbabazi itself. Now in the second term of the 2016 school year, children are showing a great interest in being at school, applying their knowledge to real life and learning life skills through their games. Even children in the middle class, who have only been at pre-school for five months, can already draw lines and then join those lines up to form letters. They do this either by writing with pencils on paper or with chalk on the floor. All this will prepare the children well for their transition to primary school later.

But learning to play and interact with each other is regarded as just as important as academic progress at Imbabazi Pre-school. For example playing a game requiring the children to run on just one leg made them think about how they can use the lessons learnt in the game and turn them into life skills. Amongst the responses given by the children to the effect this game had on them were:

In addition to activities in the classroom, the pre-school takes full advantage of all the benefits of its location at Imbabazi. The children make field visits around the site, studying the vegetables and flowers which grow there and learning how to plant seeds and tend to vegetables. They are also able to study the different colors found in the gardens and differentiate between them.

The Imbabazi Pre-school can only operate with the support of Imbabazi’s friends, and any donations to Imbabazi would be much appreciated and would allow this important resource to continue to offer the children of Mudende this important step in their early learning.